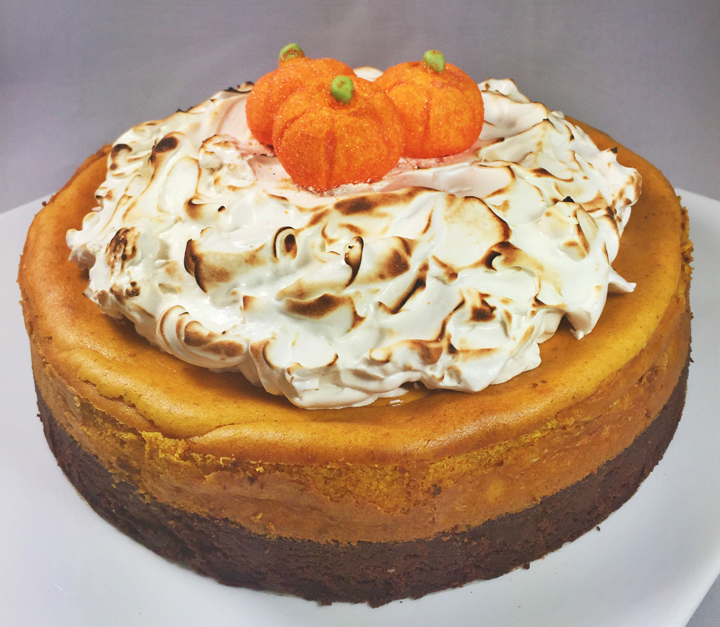 A decadent dark chocolate brownie bottom is layered with a creamy pumpkin cheesecake center and topped with a toasted marshmallow fluff icing. Need we say more? To top it off, we found our cute marshmallow pumpkins at Williams Sonoma. (www.williams-sonoma.com or your local store)

INSTRUCTIONS
Preheat oven to 350° degrees. Butter and flour a 9-inch round springform pan.

Brownie Layer
In a double boiler, or using a metal bowl set over simmering water, (the bowl should not touch the water) melt both chocolates and butter over low heat, stirring, until smooth. Remove the pan from heat and cool mixture to lukewarm. Whisk in the sugar and vanilla. Add the eggs, 1 at a time, whisking well until mixture is glossy and smooth. Stir in salt and flour just until combined. Pour into the springform pan and smooth the top. Bake for 25 -30 minutes or until a cake tester comes out with moist crumbs attached. Remove from the oven, leaving the oven on, and cool the brownie layer slightly while you make the cream cheese layer.

Pumpkin Cheesecake Layer
In the bowl of an electric mixer, beat the cream cheese and sugar on medium speed until smooth and creamy, scraping down the sides often. Add the pumpkin and beat on medium until blended. Reduce to low speed and add the eggs, one at a time. When well mixed, add in the vanilla, cinnamon, ginger, and flour, mixing on low, and scraping down the sides, until well combined. Pour the cheesecake filling over baked brownie base and smooth the top. Bake for 40 to 45 minutes until the center is set. Set on a rack and cool for 30 minutes. Run a thin knife around the edge of the pan to loosen the cake and remove the springform. Cool completely.

Toasted Marshmallow Topping
Set a heatproof bowl from an electric mixer over a saucepan of simmering water. Be sure the bowl is not touching the water. Add the sugar, corn syrup, egg whites, and vanilla. Cook over medium heat, whisking frequently until all the sugar has dissolved into the egg, about 2 minutes, and the mixture registers 160 degrees on an instant-read thermometer. Remove from the heat.

Attach the bowl to the mixer fitted with the whisk attachment. Beat the mixture on high speed until glossy and voluminous, about 7 minutes. Spread over the center of the cheesecake, leaving a 1” border, and using as much topping as you desire. Pull and swirl the topping with a spoon. Using a kitchen torch, brown the edges of the topping or place under the oven broiler to brown – being careful to avoid over-browning. Decorate with marshmallow pumpkins and serve.

*Superfine sugar dissolves faster. You can find it at specialty grocery stores or make your own by running white sugar in a food processor until ground very fine.