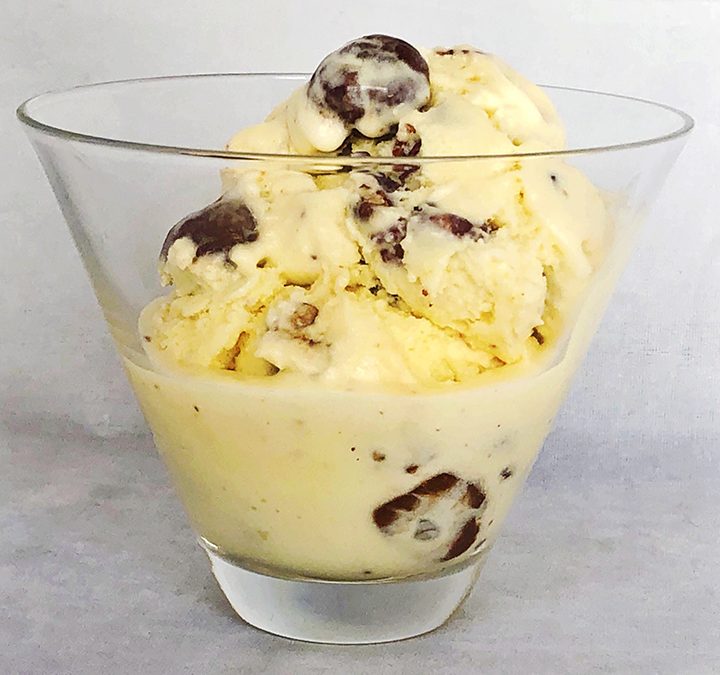 Our delicious Ice Cream recipe will be perfect for cooling off on Derby Day. Tasty vanilla and bourbon ice cream filled with toasted pecans and mini bourbon ball candies. It’s the perfect dessert for a late summer Derby Day.

INSTRUCTIONS
In a food processor, grind the Nilla wafers to fine crumbs and transfer to a large mixing bowl.

Melt the chocolate in a bowl set over a saucepan set over simmering hot water. Stir in the sugar, corn syrup, and bourbon. Add this mixture to the crumb mixture. Stir until well combined. Cover and refrigerate until cold, about two-three hours.

Form into half- inch size balls then roll the balls in a bowl of powdered sugar to coat. Transfer to a parchment lined sheet tray, arranging the balls in a single layer. Freeze for two hour or until frozen solid then remove and cut each ball in half. Place back in the freezer in a freezer safe container until ready to use.

INSTRUCTIONS
Fill a very large mixing bowl with ice and add a smaller metal bowl into the center.

Combine the milk and cream in a medium saucepan, cooking over medium-low heat until small bubbles form around the edge of the pan. Meanwhile in a medium bowl, add the egg yolks and sugar whisking until the yolks become pale yellow.

Slowly whisk in the hot milk mixture into the egg mixture. Start by adding small amounts to temper the eggs.  When mixed together, pour back into the pot and cook over low heat, stirring constantly with a wooden spoon, until the custard lightly coats the back of the spoon, about 10 minutes.

Strain the custard through a sieve into the bowl that is in the center of the ice. Stir occasionally to cool. When cooled add the bourbon and vanilla, whisk to combine, then refrigerate overnight.

Process in an ice cream maker,  then fold in the recipe of halved frozen bourbon balls plus the frozen toasted pecans pieces. Freeze for two-four hours before serving.