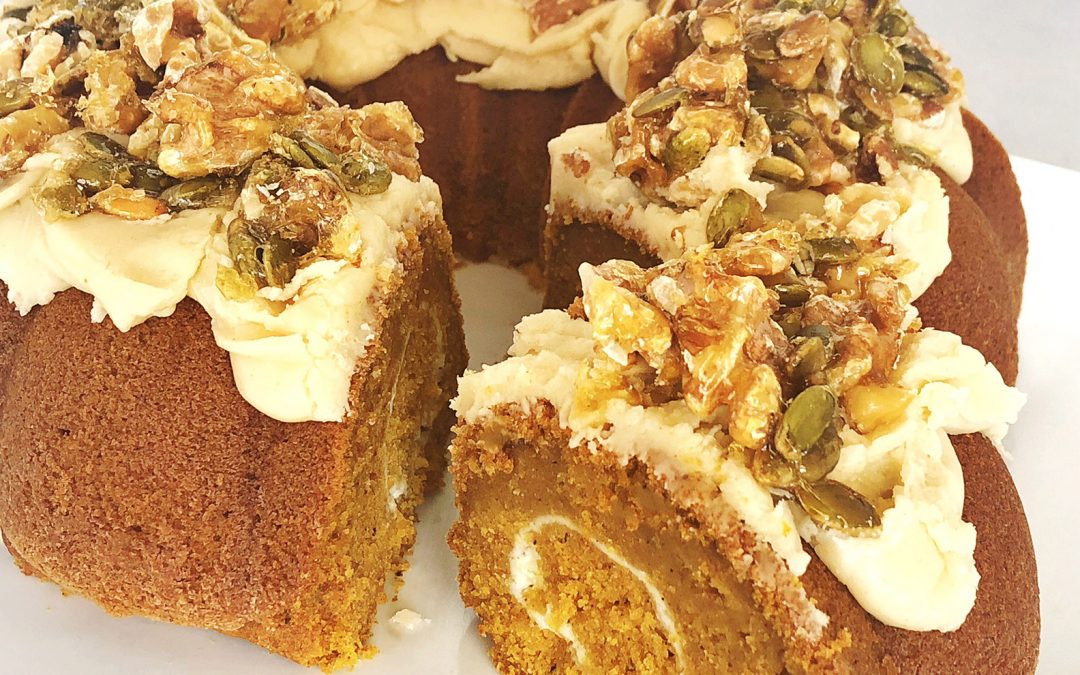 It’s Pumpkin Spice time and we have it all wrapped up in a tasty Bundt Cake. Filled with a tunnel of vanilla cream cheese and topped with brown butter icing and caramelized nuts, the cake is spiced with a blend of allspice, cinnamon, ginger, nutmeg and cloves. It’s the American quintessential flavor of fall.

Using a hand held or stand mixer, in a mixing bowl, beat the cream cheese, sugar, egg, and vanilla bean paste until smooth. Add to a large plastic disposal piping bag, being careful to keep the cream cheese 2-1/2 inches away from the pointed end, and set aside.

Preheat oven to 350°F. Brush a Bundt pan with butter, then lightly flour and set aside. In a medium mixing bowl, sift together the flour, baking powder, baking soda, cinnamon, nutmeg, ginger, cloves, and salt; set aside.

In another mixing bowl, whisk together the pumpkin, buttermilk, and vanilla; set aside.

In the bowl of a stand mixer or using a hand-held mixer, cream the butter and sugar until fluffy, about

5 minutes scraping down the sides as needed so all is beaten well. Add the eggs, one at a time, beating until well incorporated after each addition. Add in about ⅓ of the dry flour mixture, followed by ½ of the wet pumpkin mixture, and repeat ending with the dry ingredients. Scrape down the side of the bowl and mix until just combined, being careful to not overbeat.

Pour ¾ of the batter into the prepared Bundt pan. Tap the pan on the counter several time to release any air bubbles. Snip off 2-1/2” off pointed end of the piping bag. Insert the ending down into the center of the batter and pipe the cream cheese into the batter to make a tunnel in the center. Spoon the remaining batter over the top and smooth to even it out.

Bake for 60 minutes or until toothpick inserted in the center comes out clean. Allow to cool for 10 minutes in pan, then invert onto cooling rack. Cool completely.

Preheat oven to 350°F. Lay the walnuts and pepitos out on a baking sheet in a single layer. Bake for 5-8 minutes, until just slightly darker in color and fragrant. Set aside to cool. Line a rimmed baking sheet with a silicon baking mat or parchment paper.

Add the sugar into a medium saucepan and place over medium high heat. When the sugar begins to melt, stir with a wooden spoon. Keep stirring until all the sugar has melted and the color is a medium

amber. Add the nuts and stir quickly to coat all. Pour the nuts out on to the lined sheet tray and, working quickly, spread them out by using two forks to separate the nuts into small cluster. Sprinkle with the salt and cool completely.

Melt the butter in a small saucepan over medium-low heat. Cook, watching the butter carefully, and swirling the pan until the butter begins to turn amber in color.

Remove butter from heat and whisk in the powdered sugar and maple syrup until smooth. Add the milk, a few drops at a time, and only if the icing needs to be thinned. Spoon the icing over top of the cake and immediately top with the candied walnuts