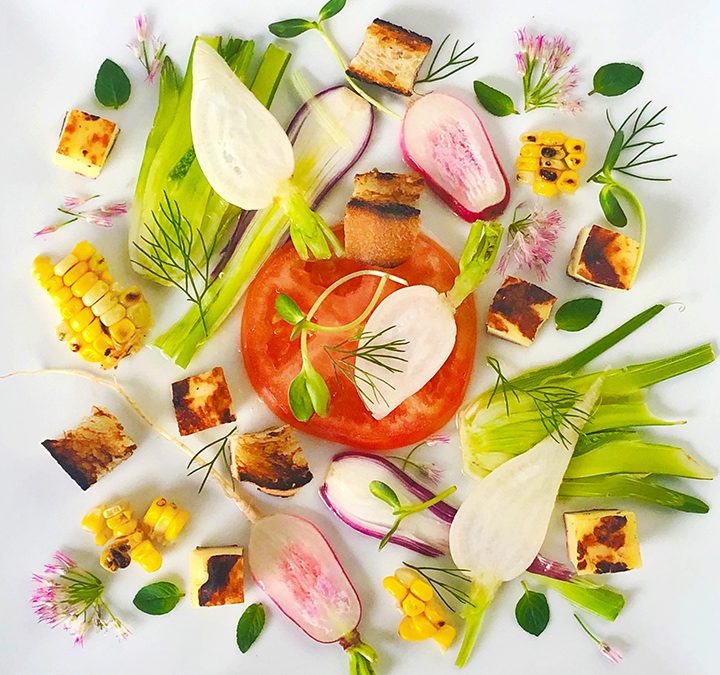 Bread Cheese has a high melting point so it can be grilled. It is traditionally a Finnish cheese made with reindeer milk. The American version uses pasteurized cow’s milk that looks like it’s been toasted because it actually has – baking it is part of it’s cheesemaking process.

Using a mandoline slicer or a very sharp knife, thinly slice the vegetables. Set aside.

Brush one side of the Bread Cheese with ½ tablespoon of olive oil and place oil side down on the grill. Cook for about 2-2 ½ minutes.  Brush the top with oil, turn, and cook until lightly charred in spots, about 2-2 ½ more minutes.

Transfer to the plate with the croutons and corn; let cool.

Cut kernels from cob, cube the Bread Cheese and cut the bread slice into cubes. Arrange on the plate with the vegetable.  Add the sprouts, mint leaves, fennel fronds, and chive flowers.

Whisk together lemon juice and ¼ cup olive oil; season with salt and pepper to taste. Sprinkle over the vegetable plate and serve. Makes 4-5 salads.