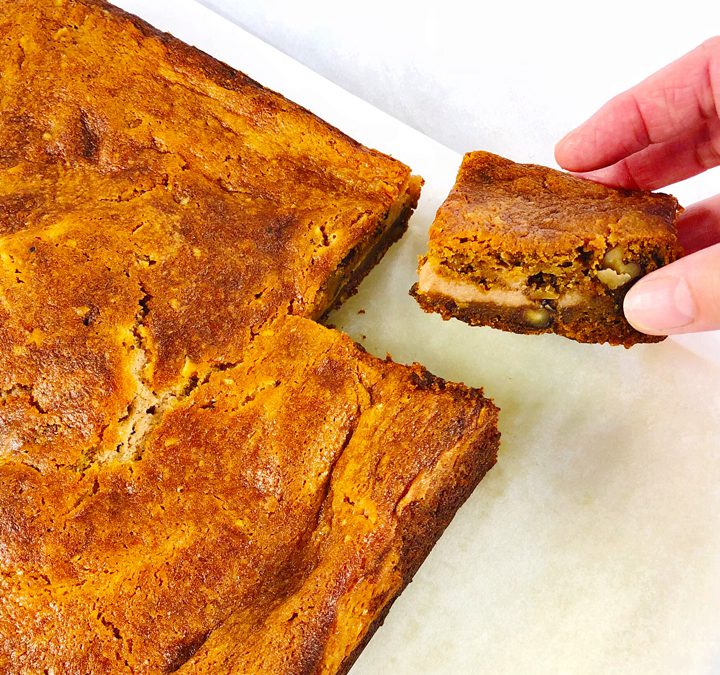 Get inspired during pumpkin season and fill your home with the fragrance of fall while these cinnamon swirl pumpkin bars bake away in your oven. Moist and delicious, we filled these bars with warm spices, a delicious cinnamon cream cheese, and toasted walnuts.

INSTRUCTIONS
Preheat oven to 350˚F. Place the walnuts on a baking sheet and toast in the oven for 10 minutes. Remove, (leaving the oven on) cool slightly, and chop. Set aside.

To make the bars: Line bottom and sides of an 8×8“ baking pan with foil, leaving an overhang on all sides. In a medium bowl, whisk together the flour, ginger, allspice, nutmeg, cloves, baking soda, and salt; set aside.

With an electric mixer, cream the butter and sugar on medium-high speed until smooth; beat in the egg and vanilla until combined. Beat in pumpkin puree then reduce speed to low, and slowly add the dry ingredients until just combined. Add the walnuts and stir into the batter by hand until incorporated. Spread mixture evenly in prepared pan.

To make the cinnamon swirl: With an electric mixer, cream together the butter, cream cheese, and cream. Add the sugar, flour, cinnamon, and vanilla, then beat until combined. Drop in tablespoons over the pumpkin batter; swirl into the batter. Smooth the top and place in the oven.

Bake until edges begin to pull away from sides of pan and a toothpick inserted in center comes out with just a few moist crumbs attached, 35 to 40 minutes. Cool completely in pan.

Using the foil, lift from pan, peel off foil, and use a serrated knife to cut into 24 squares.