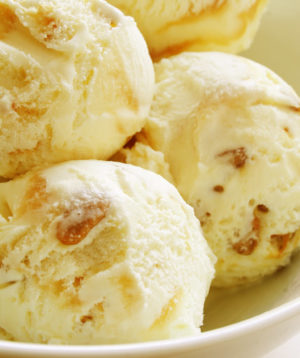 It sounds wrong, but Corn Ice Cream is popping up everywhere from celebrity chefs to foodie magazines. Sweet corn ice cream is really delicious. Our version is made from fresh corn and includes almond butter toffee to give it a “caramel corn” flavor and crunch.  Corn is at peak – so now is the time to try it! Pick up some farm fresh corn and cream to make a batch today.

INSTRUCTIONS
Preheat the oven to 350 degrees. Line a 1/4 sheet pan baking sheet with parchment paper. Spread almonds in an even layer on the parchment paper on the baking sheet. Place into oven and bake until they smell toasted and are lightly browned, about 7-8 minutes; set aside.

In a medium saucepan melt butter over medium heat. When melted, add the sugar, vanilla, and salt. Cook, whisking until the mixture turns brown and reaches 300 degrees on a candy thermometer, about 10-15 minutes.

Immediately spread the hot candy mixture evenly over the toasted almonds in a very thin layer. Be quick, it sets up fast.

Let cool completely for about 2 hours. Break the almond toffee into very small pieces and keep in an airtight container. Toffee can be made the night before but be careful. It’s so good it could disappear by morning!

INSTRUCTIONS
Using a large knife, slice the kernels off the cobs and place in a large saucepan. Break the cobs in half and add them to the pan along with the milk, cream, and 1/2 cup of the sugar. Stir to mix well. Bring the mixture to a boil, stirring, and then remove from the heat. Cover and set aside for one hour to infuse the corn flavor into the liquid. Remove and discard the cobs, pour the mixture through a fine mesh strainer into a clean bowl, pressing on the solids to remove as much liquid as possible. Discard the solids.

Set aside a larger ice filled metal bowl with a medium metal bowl fitted inside it over the ice. Set another fine sieve strainer over the medium bowl.

Pass the custard through the strainer into the cold bowl. Discard any remaining solids. When the custard is cool, cover tightly and refrigerate over night or at least 6 hours. Freeze in an ice cream maker according to the manufacturer’s directions. At the end of the freezing cycle add the finely chopped butter toffee. Place the ice cream in a tightly covered container in the freezer and freeze for 2 hours before serving.